THE STORY OF JAMES EARL RAY

On April 4, 1968, civil rights leader, Dr. Martin Luther King, Jr., was shot and killed while standing on the balcony of the Lorraine Motel in Memphis, Tennessee. The man arrested and charged -- and who entered a guilty plea – for the murder was James Earl Ray, who became one of the most hated men in America. 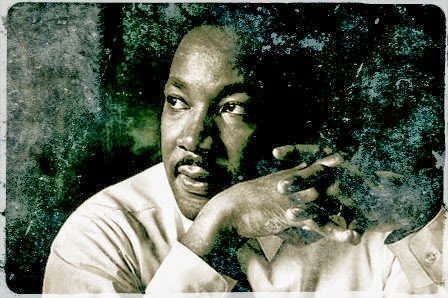 Why the small-time crook would have even consider killing a man like Dr. King remains a mystery to most, as every crime that he ever committed was for money, never for political convictions. Many have speculated that he was paid to kill King, and he went to his grave professing his innocence, but what really happened is unknown. Few Illinois residents know (or care to remember) that James Earl Ray was a native of the state – specifically Alton, Illinois – or that a robbery that he committed in Alton may have actually financed the assassination of Dr. King.

James Earl Ray was born in Alton on March 10, 1928 in a small frame house in the 1000 block of West Ninth Street. His family moved to Quincy after his father was run out of town following his arrest for writing a series of bad checks. It was in Alton, however, that Ray's criminal career began. He was a cheap crook who held up gas stations and stores and was arrested several times for burglary and armed robbery. In a 1952 robbery attempt, he actually dropped his wallet at the crime scene, which led to his arrest. He spent time at the Illinois State Prison in Joliet and then returned to Alton again. 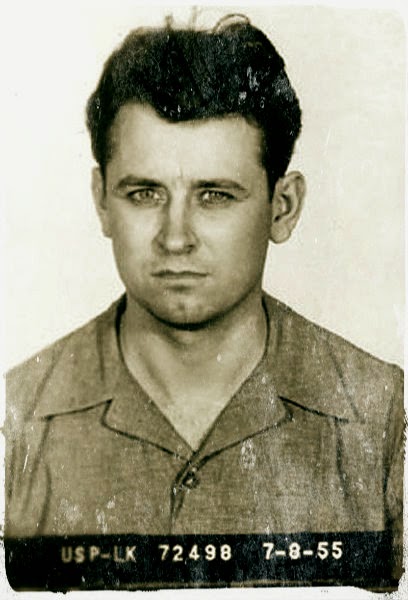 In 1959, he robbed Wegner's Food Store in Alton and fled to Missouri. While on the run from police officers, he clownishly fell out of his escape car and was immediately arrested. Ray was already wanted for a robbery in that state and so he was sentenced to two terms at the Missouri State Prison. Incredibly, he escaped from prison by hiding in a large box that was used to transport bread to the prison's farm crew. He vanished on April 23, 1967 and again returned to Alton.

In July 1967, Ray robbed the Bank of Alton and managed to get away with $30,000. Investigators came to believe that it was with this money that Ray fled the country after killing Dr. King.

After the robbery, he left Alton and eight months later, turned up in Memphis. Using several aliases, Ray rented rooms all over the city, one of which was directly across the street from the motel where King was staying. As he stood at a bathroom window on the night of April 4, Ray had a clear shot at the civil rights leader as he emerged from his second-floor room and stood talking to some friends on the balcony. The assassin raised his rifle and sighting through a pair of binoculars, squeezed the trigger only once. The bullet ripped through King's neck, passed through his lower jaw, severed his spinal column and sent him spinning back against the wall. King died without speaking an hour later at a nearby hospital. 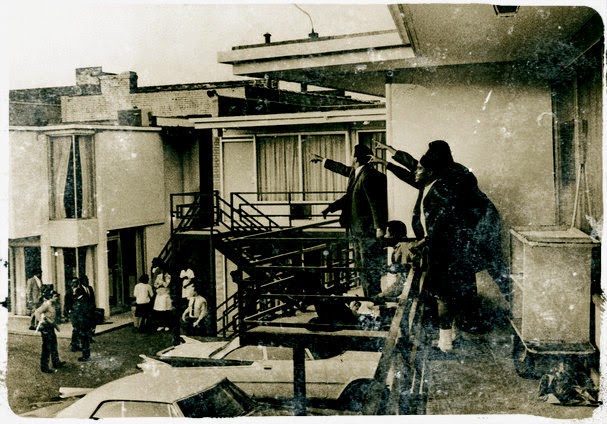 Friends and staff members of Dr. King react after shots ring out
at the Lorraine Motel

The moment after firing his weapon, Ray calmly left his possessions in the room and casually drove away from Memphis, crossing into Canada three days later. Despite being listed on the FBI "most wanted" list, he stayed in Toronto for a month and then using a Canadian passport (and another alias), he departed for London. After remaining there for six days, he flew to Lisbon, spent five days at the Hotel Portugal and returned to London. Some reports claim that it was in Lisbon that Ray received payment for killing King. Back in London, though, Ray moved erratically from hotel to hotel and then, as if to prove what a moronic small-time hoodlum he was, Ray called several London newspapers and inquired as to how one might go about enlisting in the mercenary military forces in Africa. Days later, he was arrested by the London police.

Ray was almost immediately scheduled to stand trial in Memphis in March 1969 but then he abruptly pled guilty after being extradited from England. He was sentenced to 99 years in prison after just a two-hour hearing. Three days later, Ray recanted his confession and claimed that he had been set up for the assassination by a man named "Raoul," who he had met in Montreal. He later wrote a book that claimed he was a political prisoner and the victim of a vast conspiracy.

Ray had hired Jack Kershaw as his attorney, who promoted Ray's claim that he was not responsible for the shooting. Kershaw and his client met with representatives of the United States House Select Committee on Assassinations and convinced the committee to run ballistics tests—which ultimately proved inconclusive—that they felt would show that Ray had not fired the fatal shot. Kershaw claimed that the escape was additional proof that Ray had been involved in a conspiracy that had provided him with the outside assistance he would have needed to break out of jail. Kershaw convinced Ray to take a polygraph test as part of an interview with Playboy magazine. The magazine said that the test results showed "that Ray did, in fact, kill Martin Luther King Jr. and that he did so alone." Needless to say, this was not what Ray wanted to hear but he managed to spin it into further evidence of the conspiracy against him.

Strangely, though, Dr. King’s son, Dexter, met with Ray in 1997 and publicly supported his efforts to obtain a retrial. Dr. William Pepper, a friend of King in the last year of his life, represented Ray in a televised mock trial in an attempt to get him the trial he never had. The King family has since concluded that Ray did not have anything to do with the murder of Martin Luther King, Jr.

Ray died in prison on April 23, 1998, at the age of 70, from complications related to kidney disease and liver failure caused by hepatitis C. While his claims of far-reaching conspiracies may be hard to swallow, there are still a number of unanswered questions in regards to Ray and the King assassination. However, they are questions that are likely never going to be answered.

Death Of A Goddess

The Mysterious end of Marilyn Monroe There are few personalities of the twentieth century that have inspired as much enthusiasm and wor...

CAPONE The Early Days of America’s Most Infamous Mobster On this day, January 17, 1899, Alphonse Capone was born in Brooklyn, New Yo...

INGLORIOUS POWER The Notoriety of the Illinois Governor’s Office Sigh. Corruption in Illinois politics never seems to leave the news...

Death Of The Ice Cream Blonde

Big Jim Goes To The Grave

THE FUNERAL OF JIM COLOSIMO GODFATHER OF THE CHICAGO UNDERWORLD On May 14, 1920, the first of the great, gaudy, gangland funerals in ...

Senators From Illinois Proposed On Friday