HAUNTINGS OF THE HOCKENHULL BUILDING

On January 15, 1966, seven people were killed when a fire raged through the apartments above Walgreen’s drug on the east side of Jacksonville, Illinois’ downtown square. This was, by all known accounts, the greatest loss of life from fire in the city’s history. Investigation later ruled that the fire had been an accident, started by a burning cigarette, but the eerie result was that it left a haunting in its wake – a chilling presence that still makes its presence known in the building today.

Warga’s (the name of the Walgreens store) in Jacksonville was still located on the downtown square in 1966. It was a remnant of what had once been a thriving shopping district during the heyday of the smaller, family-owned businesses that once dominated commerce in every American city. Jacksonville was no exception. Anything that you could possibly want could be purchased downtown during the nineteenth and early twentieth century. After World War II, a shift in where people shopped began to occur, but before that, you could buy everything from suits to dresses, furniture, tools and auto parts in downtown Jacksonville. Many locals purchased toiletries or had prescriptions filled at Walgreens, which was located in what was known as the Hockenhull Building. 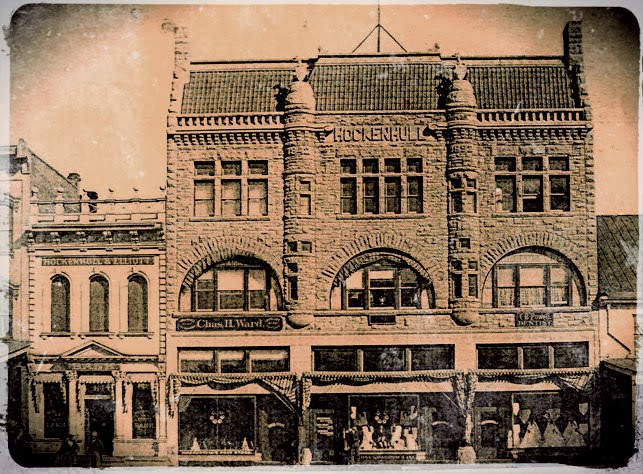 The Hockenhull Building on the downtown square.

John and Robert Hockenhull arrived in Jacksonville in 1839. Both men had been apothecaries in England and they opened a small drug store on the city square. They prospered and soon opened a dry goods store on East State Street. In 1866, Robert branched out further and with Raymond Kind and Edward Elliott, opened the Hockenhull, King and Elliott Bank. By this time, Robert had purchased a home on Grove Street and had become a trustee for Illinois College and for the All-Female Academy, that later became known as MacMurray College. He was one of the most important men in the city and one of the wealthiest. In 1891, he expanded his holdings with the construction of the Hockenhull Building on the east side of the square. The towering stone building still looms above the sidewalk today, although any business that would have been known to Robert Hockenhull has long since vanished from Jacksonville.

Warga’s was just one of the many businesses still operating during the fading days of the old square. Before its recent revitalization, the square declined for decades, much like most downtown business districts across the country. As new businesses opened along Morton Avenue, downtown Jacksonville slowly began to die. Many of the remaining stores had apartments over the shops, often cramped and dingy lofts that were as weary as the declining businesses below them. In the Hockenhull Building above Warga’s, there were apartments on the second and third floors – apartments that became death traps on a cold winter’s night in January 1966.

According to newspaper reports at the time, the scene at the fire was chaotic. Residents in the building frantically tried to escape the flames while firefighters were working to extinguish the blaze and save the tenants. One man, Robert Lee Brown, 18, who was sleeping with his family in one room of their four-room flat, was rescued by firefighters who used an aerial ladder truck to whisk five people from the upper part of the building within five minutes of their arrival on the scene. The only other member of the Brown family to escape death that night was one of Robert’s younger siblings. The rest of them perished from asphyxiation from the smoke. 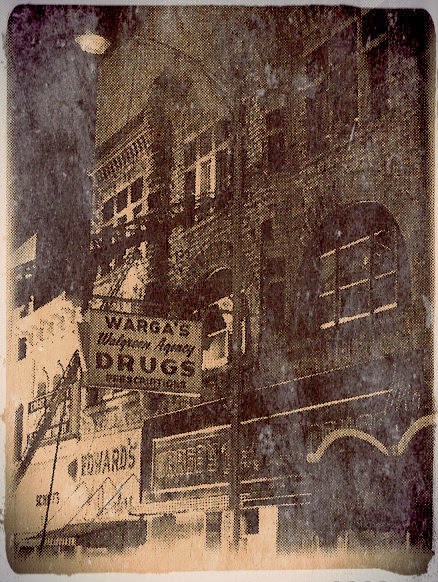 The Warga's drug store on the lower floor of the Hockenhull Building on the night of the deadly fire in January 1966.

John Yeager, his wife and two children were trapped in their third floor apartment, but remaining calm, he managed to get them out of a rear window and to a roof below. Tragically, an elderly couple, Alice Leggett and Charles Souza, who lived just on the other side of the Yeagers’ wall, were not so lucky.

Authorities believed that about a dozen people escaped from the apartments on the second and third floors, including Kathryn Wease, 19, and her two children, ages 13-months and 6-weeks. The janitor of the building, Virgil Duncan, managed to make it out with two unidentified tenants, who lived above Barney’s gift shop. Those who died in the blaze were Leota Mae Brown, 46; her four children, Ray, 15; Donna, 14; Rickey, 10; and Jimmy, 2; along with Leggett and Souza.

Elsie Brannan, 76, was the first to realize that something was wrong in the building around 1:30 a.m. Unable to sleep, she repeatedly thought she smelled smoke, opened her door and saw the flames in the hallway. Although elderly, Elsie reached a window transom, some six feet off the floor, and managed to pull herself up over the door and through the narrow opening. She dropped to the floor in the dense smoke and made her way through a storeroom above the drug store, breaking a window to reach the roof. Several people who escaped from the fire later told reporters that they heard someone yelling “in back, and ringing what sounded like a bell or someone banging on pans.”

Mrs. Brannan would later admit that she did what she could to rouse the other sleeping tenants. She then broke out a window at the rear of Birdsell’s tailor shop, making her way through the darkness to a window above East State Street, which she promptly shattered. Waving a piece of cloth from the tailor shop, she was eventually spotted by a motorist driving past.

Gary Strubbe, who was driving around the square a few moments later, saw Clara Davis, her daughter, Kathryn Wease, and her two young children frantically screaming for help from an upper floor. He went immediately to the police department and sounded the alarm. Within minutes, the fire department was on the scene. When firefighters arrived, Clara and Kathryn were each holding a child out of the apartment windows and rescue workers at first thought they might throw them from the second floor. Mrs. Davis later explained that they were holding the infants outside of the window to keep them out of the dense smoke. Firefighters used the aerial ladder to save the women, children and Robert Brown and then to work looking for other survivors.

Led by Assistant Fire Chief Alvin Smith, a crew equipped with oxygen masks groped their way through the smoke to the third floor. Meanwhile, other firefighters battled their way to the second floor, where they discovered the origin of the fire and quickly began trying to douse the flames that were roaring up the wall to the third floor. By this time, nearly 100 people had gathered in the square and many of the men assisted the firefighters in moving hose lines.

A cheer went up as survivors were brought to safety, but then a hush fell over the crowd when someone called out that there were still people trapped on the third floor. By this time, though, the crew led by Assistant Chief Smith had reached the victims and were carrying the bodies out onto a roof at the rear of the building. The departure of several ambulances without their emergency lights bore mute witness to the fact that some of the people trapped in the building had not escaped with their lives. “On Saturday morning,” one news reporter wrote, “Jacksonville asked why and how?”

Fire Chief Dale Bond attempted to answer the questions. The fire, he stated, had started in the second-floor apartment, occupied by a woman named Alice McCausland. She had been found semi-conscious in a lower floor hallway between Warga’s and Edward’s jewelry store. When Police Officer John Irlam asked her at the scene how she escaped the fire, she reportedly told him, “There’s no fire up there, I put it out.”

According to Chief Bond, the fire spread from McCausland’s bedroom up the wall. The intense heat shattered a transom window and spread up the hallway wall to the third floor. Damage to the building was estimated in excess of $50,000.

Later that month, at a coroner’s inquest, Chief Bond testified that, during two separate interrogations, McCausland confessed that she had dropped a lighted cigarette in bed, which caught fire, starting the blaze. Bond stated, “She said ‘I dropped a cigarette in bed, and when I found it, smoke was coming from the covers. Then I put it out.’” Bond then said that he asked her what she did next and she replied, “'went to bed.’”

During later questioning, the chief said that McCausland would not repeat her earlier confession and firmly told him that she made it a rule not to smoke in bed. According to Charles Runkel, the police chief at the time, no charges were ever filed against McCausland for the deaths of the seven people killed in the fire. Officially, the blaze was listed as accidental.

But accident or not, seven people, including four children, died that night in the rundown apartments above the drug store. According to scores of people who have experienced the haunting that lingers in the Hockenhull Building, those who perished in the fire do not rest in peace.

In the middle 1990s, life began to return to the downtown square. Old buildings saw new activity as coffee shops, art galleries and small shops began seeking out the nostalgia of yesterday in the brick buildings and ornate structures from Jacksonville’s past. The lower portion of the Hockenhull Building was opened as a pet store and later, an art gallery – although the upper floors remained as jarring reminders of the building’s tragic past. Evidence of the fire remained starkly visible, from burned floors and walls to even charred clothing that still hung in the closets.

And it wasn’t just physical reminders of the past that could still be found. Stories soon circulated of strange shadows, footsteps, laughter and the eerie voices of children – perhaps the same children who died in January 1966. The artists on the first floor had their own experiences, speaking of cold chills, lights that turned on and off by themselves, office equipment that operated on its own and the smell of cigarettes when no one was smoking in the building.

My friend Loren Hamilton, who leads American Hauntings ghost hunts in the building, has had more than his share of strange experiences at the Hockenhull. Guests who have accompanied him for these outings have witnessed and recorded many strange things, from disembodied voices, unexplained knocks, unknown shadows, apparitions and more.

To this day, the Hockenhull Building remains one of Jacksonville’s most notorious sites. It is a place where the past truly comes back to life and where the dead are unafraid of making their presence known to the living. 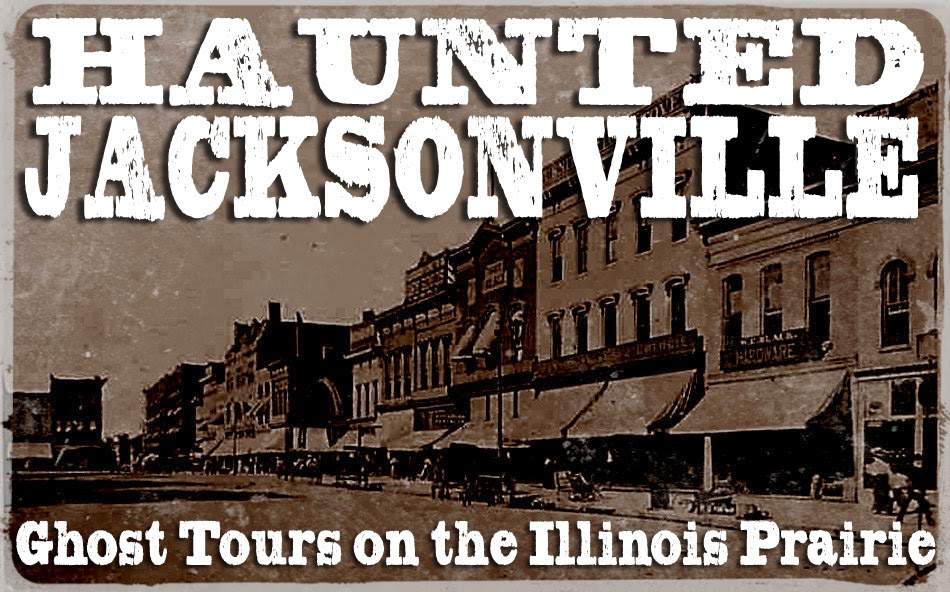