“Give ‘Em Hell” Harry Vs. The Haunts

Just three days after the 1948 election, President-Elect Harry S. Truman stepped off a train in St. Louis and, with a large grin on his face, held up a copy of the November 3 edition of the Chicago Tribune for reporters and photographers to see. The bold headline on the front page read DEWEY DEFEATS TRUMAN – the newspaper had most definitely gotten the story wrong. The headline became known as the most infamous blunder in American newspaper history. 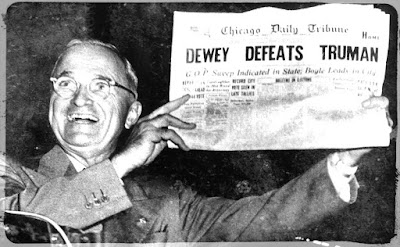 The Tribune, which had once referred to Truman as a “nincompoop,” was a notoriously Republican-leaning paper but, to be fair, the erroneous headline had nothing to do with national politics. For almost a year before the 1948 election, the printers who operated the linotype machines at newspapers all over Chicago had been on strike. Around the same time, the Tribune had switched to a method in which copy for the paper was composed on typewriters, photographed, and then engraved onto printing plates. This process required the paper to go to press several hours earlier than usual.

On election night, the earlier press batas waktu required the first post-election issue of the Tribune to go to press before even the states on the East Coast had reported all the results from polling places. The paper relied on its veteran Washington correspondent and political analyst Arthur Sears Henning for a prediction of the winner. Henning had correctly picked the winner in four out of fine presidential contests over the past 20 years. The scuttlebutt in Washington, based on the polls, was that a win by Thomas Dewey was “inevitable.” The New York Governor, almost everyone believed, would easily win the election. The first edition of the Tribune for November 3 therefore went to press with the banner headline DEWEY DEFEATS TRUMAN.

The story that accompanied it, written by Henning, reported that Dewey “won a sweeping victory in the presidential election yesterday.” He also noted that Republicans would now control both the Senate and the House of Representatives and that Dewey “won the presidency by an overwhelming majority of the electoral vote.”

As returns began to indicate a close race later in the evening, Henning continued to stick to his prediction. It was simply too late to turn back now – thousands of papers were rolling off the presses with the headline that predicted Dewey’s victory. Even after the paper’s lead story was rewritten to emphasize local races and to indicate the narrowness of Dewey’s lead in the national race, the same banner headline was left on the front page. Only late in the evening, after press dispatches began to cast doubt on Dewey’s victory, did the Tribune change the headline to DEMOCRATS MAKE SWEEP OF STATE OFFICES for the later edition. Some 150,000 copies of the paper had already been printed before the mistake was corrected.

As it turned out, Truman won the electoral vote by a 303 – 189 – 39 majority over Dewey and third candidate Strom Thurmond. Instead of a Republican sweep of the White House and retention of both houses of Congress, the Democrats not only won the Presidency, but also took control of the Senate and the House of Representatives.

Harry Truman was on his way back to the White House – a place that he already knew was infested with ghosts. 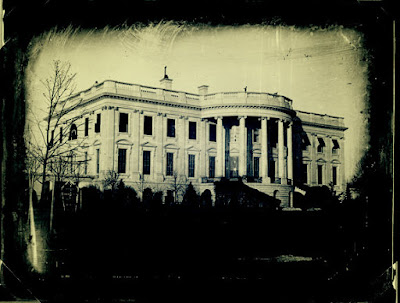 According to a number of former presidents, their families, and their staffs, there are many ghosts to be found in the White House. Most notable among the resident spirits are former chief executives Andrew Jackson and Abraham Lincoln. Of course, these phantoms do not walk the halls alone, but Lincoln is especially active in a place where he suffered not only the psychological trauma of the country tearing itself apart during the Civil War, but where he lost his beloved son, Willie, to an unknown ailment. Perhaps for this reason, he has become the most frequently encountered spirit at the White House. Theodore Roosevelt admitted to friends that he had encountered Lincoln’s ghost. Grace Coolidge once insisted that she had seen Lincoln’s ghost walking through a doorway on the second floor. President Herbert Hoover described to friends “fantastic” strange noises that he heard coming from the other side of the door to the Lincoln bedroom. Lady Bird Johnson and Jackie Kennedy both encountered the mournful spirit, as did Eleanor Roosevelt and several members of her staff. Queen Wilhelmina of the Netherlands, who stayed at the White House during World War II, surprised President Franklin D. Roosevelt, and several cocktail party guests, one evening when she told them of seeing Lincoln in her bedroom. Prime Minister Winston Churchill never discussed Lincoln’s ghost, but always stayed in the Lincoln Bedroom when visiting the White House. One morning, though, he was discovered sleeping in a room across the hall. He had moved in the middle of the night. He refused to tell anyone what had frightened him out of his usual quarters.

Of all the presidents who encountered the spirits of the White House, however, the best-known was Harry Truman. His daughter, Margaret, also saw Lincoln’s ghost walking down a second-floor corridor, just as many others had in years past. Truman made no bones about the fact that he believed the White House to be haunted. He once recalled an incident that took place in the early morning hours, about one year after he took office. He was awakened that night by knocking on his bedroom door. He got out of bed, went to the door and opened it, but found that no one was in the hallway. Suddenly, the air around him felt icy cold but the chill quickly faded as President Truman heard footsteps moving away from him down the corridor.

He later wrote to his wife, Bess, who often stayed at their family home in Missouri because she didn’t like Washington, and stated that, “I sit in this old house, all the while listening to the ghosts walk up and down the hallway. At four o’clock, I was awakened by three distinct knocks on my bedroom door. No one was there. Damned place is haunted, sure as shootin’!”

The Vanishing of the Sodder Children The holidays are supposed to be a time of happiness and celebration but instead, one of the most ha...

History & Mystery of the Millstadt Ax Murders The small town of Millstadt is located just a few miles from Belleville, a long-establis...

Mark Twain And The Supernatural

The Eerie Side of the Famous Author On November 30, 1835, Samuel Langhorne Clemens – who became better known as Mark Twain – was born in M...

Politics Can Be Murder

BLOODY TIMES WITH WASHINGTON POLITICIANS On March 22, 1820, the still young United States lost one of its greatest heroes – naval comma...

THE RISE & FALL OF DEAN O’BANION One of America’s most successful Irish gangsters was Dean O’Banion, who ran the liquor operations ...