American Journeys to the Grave

In year’s past, death was a common occurrence in American families. Most children did not survive infancy and the life expectancy of an adult was much shorter than it is today. The loss of family members and friends became a common occurrence, but funerals in the past were not necessarily a solemn occasion. 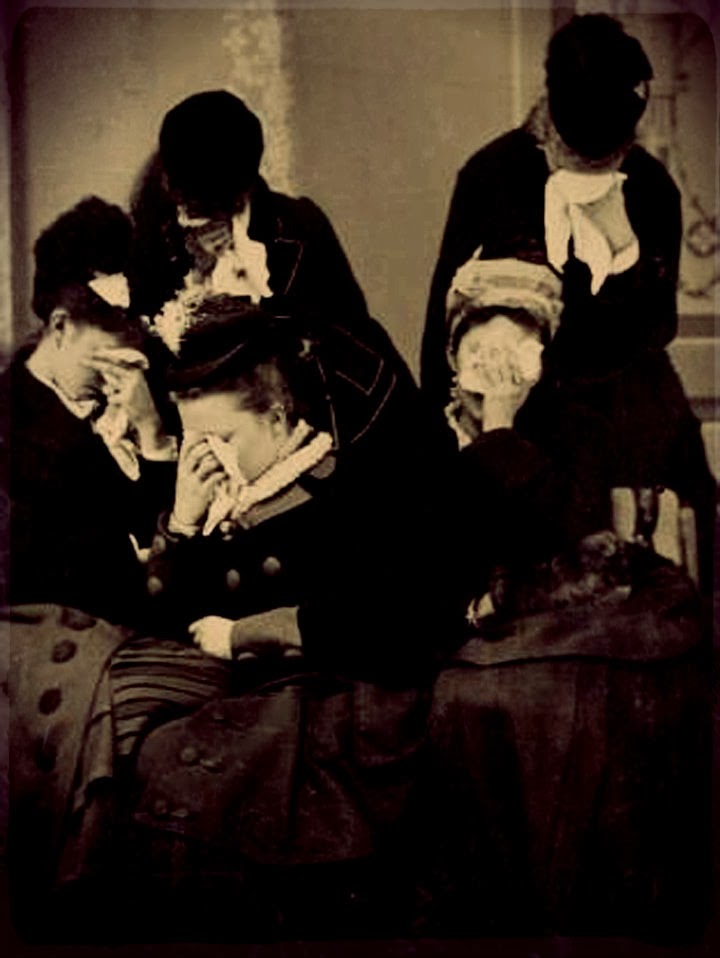 During a time when lives were often short and death accepted as a matter of fact, funerals were stark, though social, affairs. Burials generally took place on family land with friends and neighbors present. The women prepared the corpse, clothing the body in the deceased’s finest clothes, and slipping it into a shroud of waxed linen or alum-soaked wool. At first, this was the only covering using during burial, but by the late 1600s, burials were taking place in churchyards and shrouded bodies were placed in coffins. These plain pine boxes were made to measure by local carpenters and might feature a sectional lid so that the upper body could be viewed when friends came to pay their selesai respects.

Beginning in the 1830s, customers wanting something finer could choose from ready-made patented coffins. Many of these were advertised as having special advantages, including such “superior” materials as metal, marble and cast cement. In the 1840s – when most burials were starting to occur in cemeteries rather than churchyards – patents were being awarded for special models of caskets. One of them, the “torpedo coffin,” for example, actually exploded when tampered with, presumably to discourage body snatchers and grave robbers.

Getting to the burial site required the services of bearers and later, hearses. The bearers were of two types: the pallbearers, who managed the pall, or cloth that covered the coffin, and the underbearers, who did the heavy work of carrying the coffin itself. The earliest hearses were simple “dead wagons,” which might be pulled by men or by horse. As fashions changed, they became elaborate, with curtained windows and funerary urns and tasseled swags as decorations. The grandest hearses required two horses, preferably matched pairs of high-steppers. 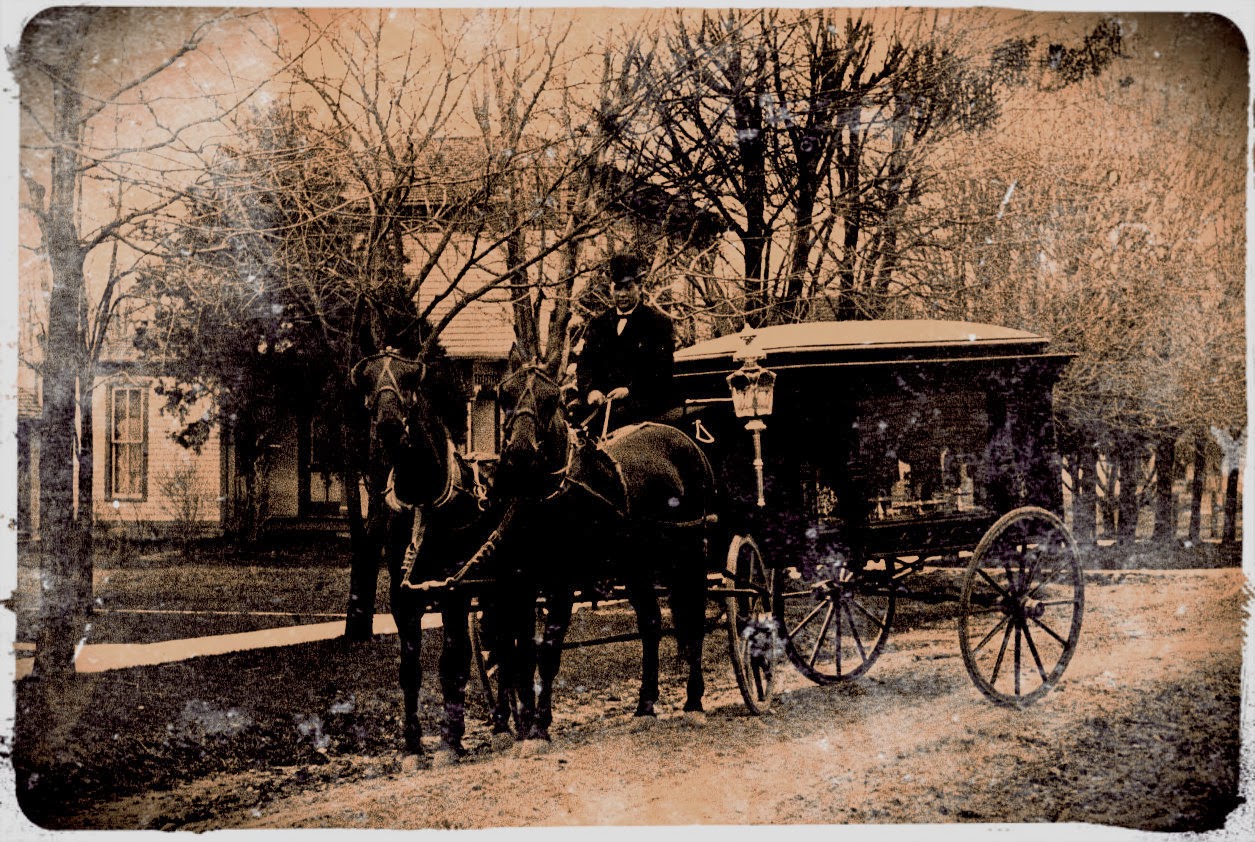 Although solemn sermons and prayers traditionally marked the services at the church and graveside, funerals otherwise could be relatively upbeat occasions. Depending on the community and the religion, attendees might be given souvenirs like dead-cakes (a kind of cookie with the deceased’s initials baked in), a bottle of wine, a ring, a scarf, or gloves. Memorial rings and gloves were particular favorites and ministers often accumulated hundreds of them. One thrifty pastor from Boston reportedly made a tidy bundle re-selling the ones he received.

Alcoholic refreshment, dispensed with lavish abandon by a committee after the burial, could leave a family in debt for months afterward. Nathaniel Hawthorne found it odd that his New England ancestors were most comfortable celebrating when it involved the “grisly jollity” of a funeral. But southerners also followed funerals with grand receptions and sent the departed off in style with volleys of gunfire as graveside salutes.

Customs everywhere changed considerably in the late 1800s, as professional undertakers took over the business of death. The coffins of old were replaced by caskets with quilted velvet interiors, silver hardware and rare woods that were said to outlast the “lapse of ages” and mitigate the “harsh realities of the grave.”

The late nineteenth century became a time when death truly began to intrude upon the living. From the moment of death and often for up to a year afterward, the activities and dress of the people close to the deceased were governed by the strict rules of the Victorian masa. Customs defining the length of mourning and type and color of clothing to be worn had been established by the middle 1800s, but the rituals grew more complex as the century continued. 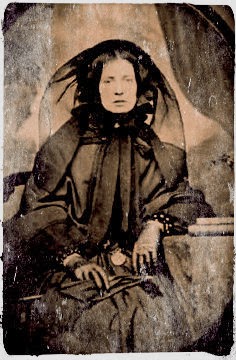 A Victorian era woman in mourning

A women went into deep mourning immediately following a death and, except to attend the funeral and church, did not leave the house for at least a month. If she lost her husband, she might remain in deep mourning for as long as two years; the loss of a parent or child required one year; grandparents and siblings, and anyone else who left an inheritance got six months; and aunts, uncles, nieces and nephews, three.

Black was the customary color for a widow’s mourning weeds during the first year, with crepe, serge and alpaca the fabrics of choice. In the second year, she could lighten up a little by switching to a glossy fabric such as silk in shades of gray and dark purple. She also replaced her usual hat with a black bonnet and was expected to wear a veil over her face during the first three months, then trail it down the back of her bonnet for another nine months. 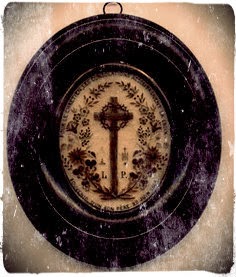 A decorative ornament that was created by using the hair of the deceased. All of the intricate patterns inside of the glass center were made out of human hair.

Ornament was out of the question during deep mourning, but bracelets and ornaments made from the woven hair of the deceased were worn after the appropriate amount of time had passed. Such items became so popular that women’s magazines published do-it-yourself instructions. Anyone interested could also turn to professional “hair jewelers” who advertised their skills as making “elaborate necklaces, broaches, rings, gentlemen’s guard and fob chains, charms and earrings that no person of good taste will venture to deny.” 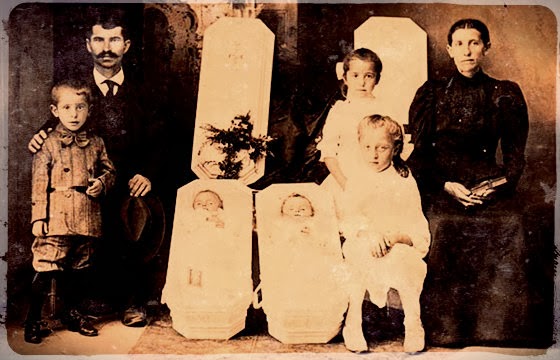 Postmortem photographs were particularly important to families with small children. Usually, a photograph taken after death would be the only remembrance they might have of their child.

Another remembrance was the portrait. If called in quickly enough, a good artist could paint a simpulan portrait of the deceased as if they were still alive. As photography became more commonplace, professionals were often called in to take a photograph of the dead reposing in their coffin, or placed in a life-like situation so that the living could remember them after they were gone. Postmortem photographs of children were especially popular. In the nineteenth century, many families could not afford to have photographs taken of their children. A postmortem photo offered them a last chance to capture their likeness before they were taken from them forever.

During this period, men also followed certain mourning rituals, but they displayed their grief for somewhat shorter times than women. They too wore suit, tie, hat band, and even shirt studs and cuff buttons in basic black. If a man used a walking stick, he might tie a black ribbon around it as a symbol of mourning. Children under twelve wore white in the summer and gray in the winter, but whatever the season, the clothes were trimmed with black buttons, ruffles, belts and ribbons.

Families even had to observe rules about their behavior around the house. A typical description for proper mourning behavior appeared in the 1882 edition of Our Deportment, or Manners, Conduct and Dress of the Most Refined Society: “There should be no loud talking or confusion while the body remains in the house. All differences and quarrels must be forgotten… and personal enemies who meet at the funeral must treat each other with respect and dignity.”

Toward the end of the century, the rules eased somewhat. According to one authority on etiquette, modern taste dictated that mourners “make no one else gloomy because they, themselves, suffer.” In the same spirit, a bicycle company produced an all-black two-wheeler suitable for mourners who wished to exercise without scandalizing the neighborhood.

When the Saints Go Marching In

But, by far, my favorite funeral traditions comes from New Orleans – a place so far below sea level that the dead have to be entombed rather than buried because, otherwise, their caskets would not stay in the ground. A tradition unique to New Orleans, the brass band funeral, began in the 1880s, peaked in the 1920s, but is still part of the culture today. As one musician described it, “You’d march to the graveyard playing very solemn and very slow, then on the way back, all hell would break loose!”

Of course, “all hell,” was generated by the jazz grup musik itself, which always included trumpet, trombone, tuba, clarinet, snare and bass drums, and whatever other instruments that participating musicians wanted to join in with. Marching along with the band was what was called the “second line,” a crowd a locals who joined the procession on the way to the cemetery. 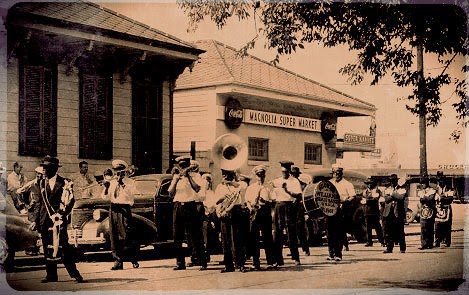 While the graveside solemnities were underway, the band and the second liners waited respectfully outside of the cemetery gates. Then, when the family and other primary mourners left, the band’s grand marshal turned to the expectant crowd and asked, “Are you still alive?” And the roar went up, “Yeah!” “Do we like to live?” “Yeah!” “Do you want to dance?” “Yeah!” And with that, the grup band swung into a medley of ragtime, Dixieland and jazz rhythms, the second line broke into exuberant dancing and singing and the whole procession boogied back into town.

This laughing in the face of death was far from cynical: it helped to reaffirm the joy of living, reminding all who participated that life was meant to be lived.

Jazz funerals are still held in New Orleans today and should you ever get the chance to watch (or better yet, participate, since I’ve never known a second line to turn anyone away), you should do so. As Jelly Roll Morton once said, a jazz funeral is “the end of a perfect death.” 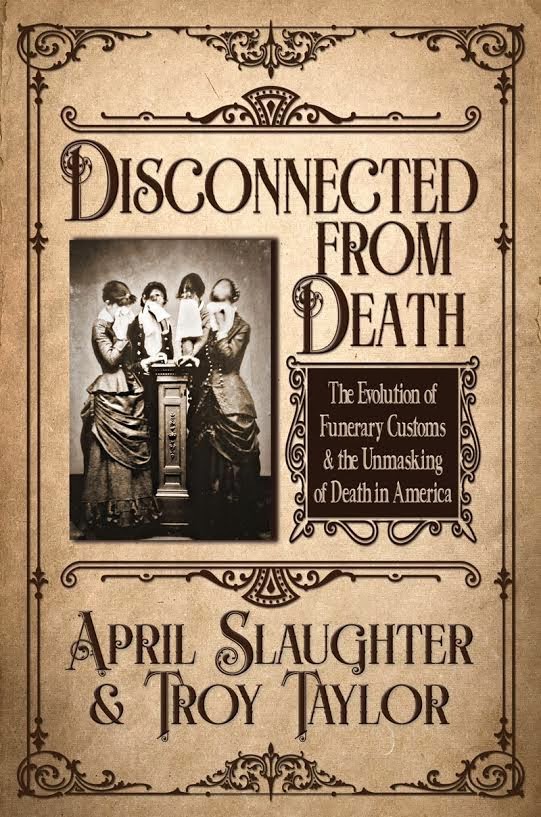