There is nothing that can ruin the holidays like murder, especially when the victims are an unassuming farm wife and six of her seven children, all waiting for the happiness and joy that usually accompanied Christmas. The story becomes even more tragic when it is revealed that their killer was the husband of the farm wife and the father of those children – and that he took his own life just after slaughtering his family.

The story of the Lawson Christmas Massacre took place in 1929, near Germanton, North Carolina. Charlie Lawson was a simple man with simple needs. He was a husband, father, and tobacco farmer. He worked hard, kept his family fed, made sure his debts were paid, and that he kept a roof over their head. The only true sorrow in his life had been when his third child, William, had died from pneumonia. Everything seemed right in the world for Charlie Lawson, but as they say, looks can often be deceiving. 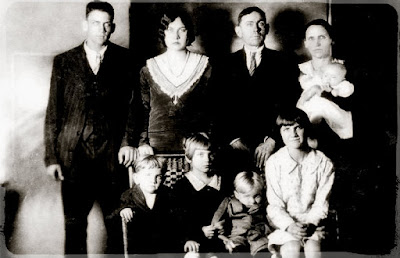 The entire Lawson family in a photo that was taken during a rare shopping trip in the Fall of 1929. Charlie bought everyone in the family a new suit of clothes and they posed in town for their first-ever family portrait.
Back Row: Arthur “Buck”; Marie; Charlie; Fannie; Mary Lou
Front Row: James; Maybell, Raymond; Carrie.

As Christmas Day, 1929 approached, the Lawson children grew more excited. They didn’t expect a lot of gifts since they had just received new clothing a short time before, but there would be lots of food to eat and lots of fun to be had with friends and relatives who lived nearby. They had no way of knowing that the day would be anything but happy – it would end in a terrifying slaughter that still reverberates in North Carolina today.

The victims of what turned out to be a baffling crime included six of the children, and Charlie’s wife of 20 years, Fanny. The youngest child was Mary Lou, who was only four months old at the time of her death. The only surviving child was Arthur, a 16-year-old that everyone called Buck. He only survived because he was sent on an errand by his father that Christmas afternoon.

The errand itself was a disturbing one. Buck and his cousin were sent trudging through the snow to Germanton to buy more shotgun shells for Charlie. However, when Buck returned home, he was stunned to find that his mother, sisters Marie, 17, Carrie, 12, Maybell, 7, and baby Mary Lou, and brothers, James, 4, and Raymond, 2, had all been slain by his father. They had been killed one by one, and Charlie had apparently chased down Carrie and Maybell after they ran away from the Lawson house in terror.

Charlie had annihilated his entire family. The interior of the house looked as though it had been drenched with buckets of blood. Some of the Lawson family had been killed by gunshot, others had been beaten to death, and others had died from a combination of the two. All of the bodies were found inside of the house, or in the adjacent tobacco barn. Some accounts say that Charlie placed small stones over the eyes of his victims.

Buck immediately ran to a neighbor’s house to ask the man to call the sheriff. He was sure that intruders had broken in and killed his family. As lawmen arrived on the scene, they came to a grim realization about what had occurred – Charlie Lawson had been the one who did the killing. When they told Buck, the young boy collapsed in the front yard.

Hours passed with no sign of Charlie. Men combed the surrounding woods and at some point around 10:00 p.m., a shot rang out in the trees behind the barn. All activity around the house suddenly stopped and everyone looked anxiously toward the woods, and then to the sheriff. Believing that Charlie may have fired the shot, and fearing that anyone venturing into the woods could be shot, the sheriff didn’t move. Eventually, a few of the men ventured into the shadowy forest. Moments later, they called back that Charlie was dead.

The scene in the woods was a strange one. Charlie had been there for hours, walking around and around in a circle around a tree. He had walked around and around the tree so many times that the snow had melted, making a path. Eventually, he sat down at the base of the tree, leaned back, put the gun barrel in his mouth, and pulled the trigger.

Newspapers all over the country featuring glaring headlines about the murders the next day. The eyes of the entire country were focused on Stokes County, North Carolina and after the initial shock of what had happened, the only one question remained: Why?

There was no apparent motive. The Lawsons weren’t rich, but they weren’t having any financial problems. Charlie Lawson was a likable man. He was a hard worker. He didn’t have any extreme religious or act strange in any peculiar way. Most people in the community liked and respected him. They couldn’t imagine why he would have done such a terrible thing.

Soon, though, two theories emerged. The first was that Charlie had a medical condition that affected his mind and made him snap that day. Earlier that summer, while breaking up some new fields, Charlie had been hit in the head with a tool. He didn’t seem severely injured by it, but a few weeks later, he started seeing a local doctor for what he described as blinding headaches and trouble sleeping. A few friends belatedly admitted that Charlie had never been the same after the injury.

A few weeks later, Charlie and his sons were working in the fields and Charlie became angry with Buck, and attacked him. Buck, almost as large as his father, defended himself until Charlie backed down. Charlie had never acted that way before. Buck then took it upon himself to try and protect the rest of the family from Charlie’s temper – which may have been the reason that Charlie sent him away on an errand when he massacred the rest of the family.

The second theory that emerged was much more scandalous. There were rumors that Charlie had impregnated his teenage daughter, Marie, and had killed his family to prevent the incestuous scandal from being known.

Whatever the truth was, though, Charlie took it to his grave.

The murders attracted so much attention that at least 5,000 curiosity-seekers showed up for the funeral of the Lawsons, who were buried in a single plot at the Browder Family Cemetery, outside of Germanton. To protect the Lawson house, Marion Lawson, one of Charlie’s young brothers, planted posts around the farm and strung up a wire fence around the site. Townspeople assumed that Marion was trying to keep away the morbidly curious, but that was not the case – he was turning the house into a tourist attraction.

In the spring of 1930, hundreds of travelers came to see the place where the murders occurred. They handled the family’s belongings, gaped at the bloodstains on the floors and walls, and stood on the spot where the Lawson children breathed their last. The locals grumbled about the “shameful” attraction for a time, but only until they realized that the tourists were stopping in town to eat, buy gas, and stay in the new hotel. With the money Germanton was making from the tourists, the little town began to thrive during an periode when most of America was suffering. As morbid as it may sound, it’s believe that Charlie Lawson saved from Germanton from the Great Depression.

After interest in the Lawson farm began to wane, parts of the gruesome display were packed up and taken on the road. It made the rounds of sideshows and carnivals throughout the country for a number of years before it was eventually shut down, and some of the pieces were returned to the farm.

As decades passed, and the house fell into decay, children and adults alike wandered through the property. On many occasions, people left the house believing that at least of the deceased Lawsons were not resting in peace. By 1980, the old Lawson house was no more. The new owners had replaced the house and barn with a cultivated field. There was nothing left to see, and nothing to explore.

But that doesn’t mean that the hauntings have stopped entirely. The home that once belonged to the Lawsons’ closest neighbors is now the Squires Inn Bed and Breakfast. Shortly after moving into the house, the owner looked up and noticed a little boy and girl peering back at her through the glass in the one of the door. They disappeared, but she saw them again, and decided to do some research. After discussing her experiences with a local historian, she was shown the Lawson family portrait, taken shortly before they died. The woman immediately recognized her young visitors in the photograph. She had been visited by Maybell and James Lawson. The historian told her the Lawson children had frequently crossed the field to play with the children who had once lived in her house.

This complete story of the Lawson family murders can be found in the book, FEAR THE REAPER, by Troy Taylor and Rene Kruse. 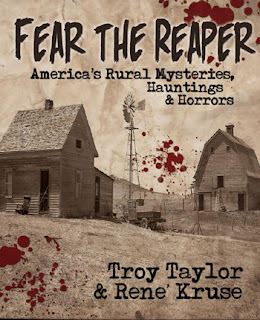