On this date in 1864, American songwriter Stephen Foster, who'd written such classics as "Swanee River," "Oh Susanna!," "Camptown Races" and "My Old Kentucky Home," died in poverty in a New York Hospital. He was only 37 years old -- and barely made any money at all from the songs that have endured for generations. 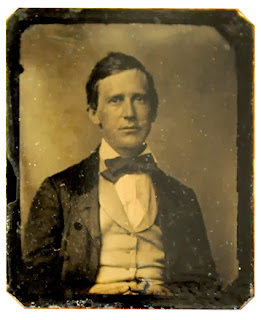 Foster grew up in Pennsylvania and received an education in English grammar, diction, the classics, penmanship, Latin and Greek and mathematics. In 1839, his elder brother William was serving his apprenticeship as an engineer at nearby Towanda and thought Stephen would benefit from being under his supervision. The site immortalized as the Camptown Races was just 15 miles from Towanda. Stephen attended Athens Academy from 1839 to 1841. He wrote his first composition, Tioga Waltz, while attending Athens Academy, and performed it during the 1841 commencement exercises; he was 14. His education continued for a brief time at Canonsburg College and while his education was paid, he had little money. Sources conflict on whether he left willingly or was dismissed, but, either way, he left Canonsburg to visit Pittsburgh with another student and never returned.

In 1846, Foster moved to Cincinnati and became a bookkeeper with his brother's steamship company. While in Cincinnati, Foster penned his first successful songs—among them "Oh! Susanna," which became an anthem of the California Gold Rush. In 1849, he published Foster's Ethiopian Melodies, which included the successful song "Nelly Was a Lady", made famous by the Christy Minstrels.

Many of Foster's songs had Southern themes, yet Foster never lived in the South and visited it only once in 1852 by river-boat voyage on his honeymoon on his brother Dunning's steam boat, which took him down the Mississippi to New Orleans.

Foster tried to earn a living as a songwriter -- a job that really did not exist at the time -- and thanks to this, plus the fact that copyrights and composer royalties didn't really exist either, Foster made very little money from his work.  Multiple publishers often printed their own competing editions of Foster's tunes, paying Foster nothing. His largest payment? He received $100 for "Oh, Susanna!"

Foster moved to New York City in 1860. About a year later, his wife and daughter left him and returned to Pittsburgh. Beginning in 1862, his fortunes decreased, and as they did, so did the quality of his new songs. Early in 1863, he began working with George Cooper, whose lyrics were often humorous and designed to appeal to musical theater audiences. The Civil War created a flurry of newly written music with patriotic war themes, but this did not benefit Foster. During this time he composed a series of Sunday School hymns, including "Give Us This Day" in 1863.

Broke, alone and depressed, Foster took up residence at the North American Hotel in the Bowery on the Lower East Side of Manhattan. He was confined to his bed for days by a fever. Foster tried to call a chambermaid, but collapsed, falling against the washbasin next to his bed and shattering it, which gouged his head. It took three hours to get him to Bellevue Hospital. He died from his injuries, which became infected, three days later.

His worn leather wallet contained a scrap of paper that simply said, "Dear friends and gentle hearts," along with 38 cents in Civil War scrip and three pennies. Foster was buried in the Allegheny Cemetery in Pittsburgh.

Sadly, one of his most beloved works, "Beautiful Dreamer," was published shortly after his death.

Stephen Foster went on to become a musical legend and a household name, but like so many other artists in American history, the true scope of his brilliance was not realized until long after his death.