On this date, March 18, 1937, the worst disaster to ever occur in a school in American history took place in New London, Texas. The horrific disaster – caused by the cancellation of a $300 a month natural gas bill – claimed the lives of at least 295 students and teachers. It is a catastrophe that the people of Texas will never forget.


New London was a blue-collar community in the middle 1930s. Even though the country was in the midst of the Great Depression, the local school district was one of the richest in America. Most of the residents of this East Texas town had been drawn there during the late 1920s and early 1930s when jobs dried up in other parts of the country. New London’s oil fields were expanding and offered more jobs than could be filled.

At a time when small, often one-room rural schoolhouses were common, New London had a brand-new school. With the onset of Franklin D. Roosevelt’s New Deal, community leaders successfully combined state, county and federal funding to build a new, large, one million dollar school complex. The new facilities offered the most up-to-date curriculum for the students, from first grade through high school. It offered the most modern course of studies available, allowing students to choose between vocational and college preparatory courses in the later grades. This kept students in school longer and prepared them for jobs and college when they graduated. The campus became a great source of pride for area parents who had generally only had limited access to education during their own childhoods.

The new school was built on sloping ground and a large dead-air space was located beneath the structure. It would be learned later, during the investigation that followed the disaster, that in spite of the large initial investment in the project, planners had taken many dangerous shortcuts during construction.
The school board had overridden the original architect's plans for a boiler and steam distribution system, instead opting to install 72 gas heaters throughout the building. Early in 1937, the school board canceled their natural gas contract and had plumbers install a tap into the Parade Gasoline Company's residue gas line in order to save money. This practice, while not explicitly authorized by local oil companies, was widespread in the area. The natural gas extracted with the oil was seen as a waste product and was flared off. As there was no value to the natural gas, the oil companies turned a blind eye. This "raw" or "wet" gas varied in quality from day to day, even from hour to hour.

Natural gas in its original state is both odorless and colorless, and because of that any leaks would be undetectable. The odor that most associate with gas today is added as a safety precaution by the commercial companies that sell it. In those days, there was no warning about a leak. Students had been complaining of headaches for some time, but no paid much attention to this. Unknown to everyone, gas had built up inside the crawlspace that ran beneath the entire 253-foot building.

Between 3:05 and 3:20 p.m., on March 18, Lemmie R. Butler, a manual training instructor, turned on an electric sander in one of the school’s vocational workshops. It is believed that the sander's switch caused a spark that ignited the gas-air mixture.

Reports from witnesses stated that the walls of the school actually bulged outwards and the roof lifted off of the building, cartoon-fashion. But this was no cartoon. In seconds, the ceiling came crashing down on the seven hundred children and forty teachers inside. The main wing of the structure collapsed. Flames that were ignited by the explosion quickly died out since the building was fireproof but the strength of the explosion’s concussion and pieces of falling debris instantly killed most of the adults and children inside. The force of the explosion was so great that a two-ton concrete block was thrown clear of the building and crushed a 1936 Chevrolet parked nearby.

The explosion was its own alarm, heard for miles away. The most immediate response was from a group of mothers who were gathered for a PTA meeting in the cafeteria building, which was about 300 feet from the main building. They helplessly watched as the building collapsed on everyone inside. The women screamed and raced toward the school, digging for hours to reach victims who were alive under the rubble and could be heard screaming for help.
Within minutes, area residents started to arrive and began digging through the rubble, many with their bare hands. Roughnecks from the oil fields were released from their jobs and brought with them cutting torches and heavy equipment needed to clear the concrete and steel. A crowd of nearly 10,000 area residents quickly gathered at the site of the explosion, desperate to help. Their cars and pickup trucks clogged the roads and blocked the highways leading in and out of town.
Assistance poured in from outside the immediate area. Governor James Allred dispatched Texas Rangers, the state highway patrol, and the Texas National Guard. Thirty doctors, 100 nurses, and 25 embalmers arrived from Dallas. Airmen from Barksdale Field, deputy sheriffs, and even Boy Scouts took part in the rescue and recovery.
Most of the dead and injured were children and teachers who had been gathered in the auditorium. Some were rescued and cared for in hospitals as far away as Shreveport, Louisiana. However, hopes of finding more survivors dimmed as the sun began to go down. Illuminated by the powerful lights from the school’s football field, a crowd of grief-stricken parents, relatives, friends and onlookers stood near a lengthening line of bodies covered by white sheets.
Most of the bodies were either burned beyond recognition or blown to pieces. One mother had a heart attack and died when she found out that her 16-year-old daughter’s body had been found. Only part of the girl’s face and some of her bones were still intact. Another boy was identified by the pull string from his favorite toy top, found in his jeans pocket.

Rescuers worked through the rainy night until, seventeen hours later, the entire site had been cleared. Buildings in the neighboring communities of Henderson, Overton, Kilgore and as far away as Tyler and Longview were converted into makeshift morgues to house the enormous number of bodies, and everything from family cars to delivery trucks served as hearses and ambulances. Mother Frances Hospital in nearby Tyler was scheduled to open the next day, but the dedication was canceled and the hospital opened immediately.
Reporters arrived to cover the calamity, but found themselves caught up in the rescue effort. Former Dallas Times Herald executive editor Felix McKnight, then a young Associated Press reporter, recalled, "We identified ourselves and were immediately told that helpers were needed far more than reporters." A 22-year-old reporter named Walter Cronkite also found himself in New London, on one of his first assignments for United Press International. Although he went on to become one of America’s most beloved newsmen, covering everything from World War II to the Kennedy Assassination and Vietnam, he was quoted as saying decades later, "I did nothing in my studies nor in my life to prepare me for a story of the magnitude of that New London tragedy, nor has any story since that awful day equaled it.”

The people of New London recovered as best they could. Not all of the buildings on the school campus had been destroyed. One of the surviving structures, the gymnasium, was quickly converted into multiple classrooms. Inside   tents and the modified buildings, classes resumed ten days later. A new school was completed on the property in 1939.

Families also received an outpouring of support from nearby communities, from people all over Texas, and from well-wishers across American and the world. Adolf Hitler, who was at the time the German Chancellor, paid his respects in the form of a telegram. It remains on display in the New London museum today.

Almost as the dust was still settling in New London, investigations began seeking a cause for the explosion. Experts from the United States Bureau of Mines concluded that the connection to the residue gas line was faulty. It had allowed gas to leak into the school, and since natural gas is invisible and is odorless, the leak was unnoticed. To reduce the danger of future leaks, the Texas Legislature began mandating that thiol, a strong-smelling belerang compound, be added to natural gas. The practice soon began to be used all over the country.

A group of parents brought a lawsuit against the school district and the Parade Gasoline Company, but the courts ruled that neither could be held responsible. In the aftermath of the disaster, school superintendent W. C. Shaw was forced to resign amidst threats that a lynch party would be sent after him. Sadly, Shaw himself had lost a son in the explosion.

Over the years, the New London School explosion has received relatively little attention given the magnitude of the event. Explanations for this are speculative, but most center around residents' unwillingness to discuss the tragedy. It was a memory that most simply did not want dredged up. In addition, many of the parents left the area in the years that followed since most were transient oil workers. Another reason for the lack of attention was believed to be the overshadowing effect of the Hindenburg disaster, which happened two months later.

The school disaster remains a haunting memory in New London, even after all of these years. Many questions remain unanswered, even the exact number of those who died in the blast. It may actually be much higher than the nearly 300 that has been estimated over the years. Many of those killed were the children of temporary residents, oilfield workers who moved from one place to another, depending on what work was available. It’s believed that some of these “roughnecks” may have collected the bodies of their children after the disaster and returned them to be buried near their respective homes.

The true magnitude of this disaster may never be known.

The story of the New London school disaster appears (with numerous others) in the book AND HELL FOLLOWED WITH IT by Troy Taylor & Rene Kruse. The book is available in a print edition from the situs web and also as a Kindle and Nook edition. 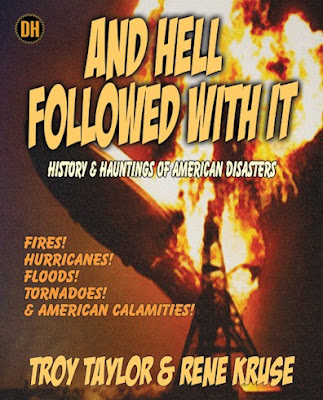