The holiday season of 1924 was a brutal one in Oklahoma. As winter solstice was marking the change of seasons, bitter cold swept across the plains. Frigid temperatures raged south out of western Canada like a runaway freight train. Snow covered most of Oklahoma. The roads were slippery and the chill caused a run on heating stoves and warnings were sounded for railroad men, police officers, and others who worked outdoors at night. And then came Christmas Eve, when a fire broke out in a one-room schoolhouse in Babbs Switch, located just a few miles south of Hobart, Oklahoma.

The tragedy is nearly forgotten today, but at the time, it turned Christmas into a mournful holiday for the people of the region. Three dozen people died on that cold night – and left a dark haunting that lingered behind for years. 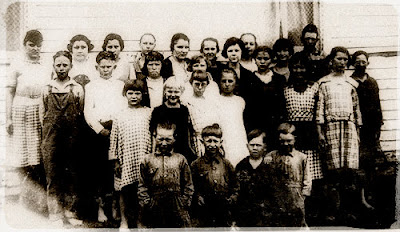 Children from the Babbs Switch School near Hobart, Oklahoma

The evening of December 24 began with joy and laughter. The little school building was packed with over 200 students and families, enjoying the annual Christmas program. A Christmas tree, decorated with lighted candles, stood at the front of the room. Beneath it was a pile of presents that were going to be handed out to the children at the end of the evening. The fire began when a teenage student dressed as Santa Claus was removing presents from under the tree. He bumped against a branch and one of the candles was knocked loose. The flames ignited the sleeve of his suit and things quickly spun out of control. Fire ignited paper decorations, tinsel, and dry needles and spread quickly across the stage.

In a panic, people rushed to the building’s single door, which opened inward, as far too many doors to public buildings did in those days. As more people piled against the door, it prevented anyone from opening it. Others rushed to the windows for escape. Unfortunately, though, the windows had recently been fitted with bars to keep vandals out of the school. A few men managed to break the glass and pass smaller children to safety between the bars. A teacher, Mrs. Florence Hill, saved several of her students’ lives in this manner, but she herself perished in the fire.

When it was all over, the fire had claimed 36 lives, among them several entire families.

The dead and injured were transported by car to Hobart, the nearest town of any size, and a temporary morgue was set up in a downtown building. As the numbers of the dead and injured (37 people were taken to the Hobart hospital) were counted, there seemed to be one child that was not accounted for. The child, a little three-year-old girl named Mary Edens, was reported as missing, but her body was never found. Her aunt, Alice Noah, who escaped from the school but died a few days later, claimed that she carried Mary out of the building, but handed it to someone she did not know. Mary had simply disappeared without a trace in the wake of the fire.

The Babbs Switch fire led to stricter building codes in Oklahoma, especially for schools. It was also one of the catalysts for terbaru fire precautions against inward-opening doors, open flames, locked screens over windows, and a lack of running water near public buildings. Those who died that night probably saved the lives of future generations of Oklahoma schoolchildren.

As it happened, there was a strange twist to the Babbs Switch story in 1957. A California woman named Grace Reynolds came forward and claimed that she was actually Mary Edens, the little girl presumed killed in the 1924 fire. Mary had been a toddler at the time and her body was never found. Reynolds story was that she was handed out the window by her “real” mother into the arms of a childless couple who assumed that none of her relatives survived the fire and informally adopted her and raised her as their own. Reynolds became a minor celebrity, reuniting on the air with the Edens family on Art Linkletter’s House Party television show, and later wrote a book about her experiences entitled Mary, Child of Tragedy: The Story of the Lost Child of the 1924 Babbs Switch Fire.

Sadly, though, the whole thing was a hoax. No one knows why Grace Reynolds believed, or claimed to believe, that she was Mary Edens. It’s possible that she believed that she was adopted, or that perhaps she learned of the fire and saw a way to get attention by claiming to be the missing little girl. Her motives remain a mystery.

In any case, a local newspaper editor uncovered the hoax, and informed Mary Edens’ father about what he had discovered. Mary’s father asked that the editor not publish his findings, as he believed that his wife could not endure losing her child for a second time. The editor respected his wishes and his findings were not revealed until 1999.

Even this sad footnote to the fire was not the end of the story. In 1925, a new school was built at the site, but closed in 1943 when the Babbs Switch district was absorbed by the nearby Hobart school district. A stone monument was placed at the scene, bearing a short description of the fire and a list of the dead – the dead that some say do not rest in peace.

But it’s not the site of the school where ghosts of the past are reportedly restless. The bodies that were taken from the site were brought to Hobart and placed in a temporary morgue, which is now the fire station and the Shortgrass Playhouse. It is rumored that the ghost of a little boy has been seen throughout the building, running around the fire truck bays and scampering down hallways. There is also the ghost of a little girl who has been seen on the stage of the playhouse.

Who these spectral children may be is unknown. Half of the dead from the fire were children and none of them were recognizable. They had to be identified by jewelry, dentures, and anything that might be unique to a person. Two little brothers were identified by a toy gun found lying next to one boy, and the belt buckle of the other. The identities of the boy and girl who remain at the place where their bodies were taken after the fire remain a mystery, but we can only hope that they have found a little peace since their terrible deaths.

Ghosts of the Mansfield Reformatory This date, December 31, was the supposed to be the official closing of the Ohio State Reformatory in...

CAPONE The Early Days of America’s Most Infamous Mobster On this day, January 17, 1899, Alphonse Capone was born in Brooklyn, New Yo...

The Suspects In the minds of many Chicagoans, the St. Valentine’s Day Massacre was the selesai blow to the city’s already-bloody reputa...